In time, the 300-odd "Mathematical Games" columns that Martin wrote for Scientific American reached even more readers via fifteen books, which can also also be enjoyed today in a single location as a searchable CD-rom issued by the MAA.

The first of these books was published in 1959, and the last appeared in 1997. The Scientific American columns they collected were updated by Martin, who included solutions to problems that had been posed, along with additional notes arising from extensive correspondence with readers. These volumes have been described by Donald Knuth (Stanford) as "The Canon–timeless classics that are always worth reading and rereading."

The order in which the fifteen "Scientific American books" should be considered is a matter of some debate. The main confusion arises as a result of there being three different Dr. Matrix collections, the later ones being increasingly complete. For example, the Wikipedia list has The Numerology of Dr. Matrix (Potter, 1967) as the fourth spin-off book, but we favor the final The Magic Numbers of Dr. Matrix (Prometheus, 1985), in position ten. One byproduct of that approach is that the Sixth Book of Mathematical Games is the fifth book below.

The following shows the U.S. first editions. Over the decades, many of these books have resurfaced with quite different covers, and sometimes new titles too. For more information, see the brief bibliography by bibliographer and biographer Dana Richards. 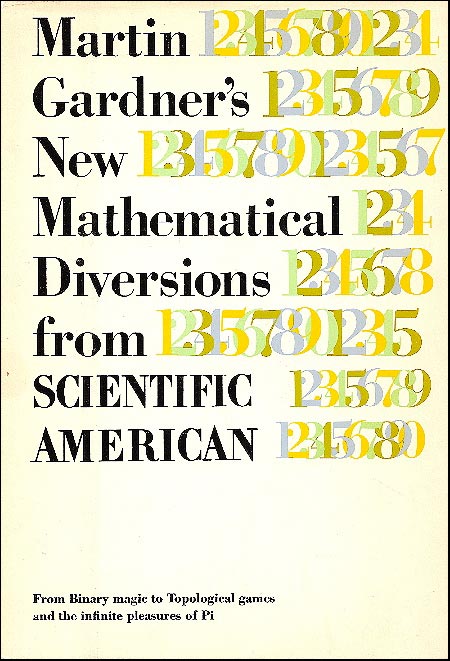 1. The Scientific American Book of Mathematical Puzzles and Diversions (Simon and Schuster, 1959, 178 pages), covers mostly the 1957 columns. This appeared later as Hexaflexagons & Other Mathematical Diversions: The First Scientific American Book of Puzzles & Games and updated one last time by Martin as Hexaflexagons, Probability Paradoxes, and the Tower of Hanoi (MAA/Cambridge, 2008).

Chapters include "Hexaflexagons," "The Icosian Game and the Tower of Hanoi," and "Polyominoes."

2. The 2nd Scientific American Book of Mathematical Puzzles and Diversions (Simon and Schuster, 1961, 253 pages), covers mostly the 1958–1959 columns. Updated by Martin as Origami, Eleusis, and the Soma Cube (MAA/Cambridge, 2008).

Chapters include "The Soma Cube," "The Monkey and the Coconuts," and "Eleusis: the Induction Game."

4. The Unexpected Hanging and Other Mathematical Diversions (Simon and Schuster, 1969, 259 pages), covers mostly the 1961–1963 columns. Updated, based on notes left by Martin, as Knots and Borromean Rings, Rep-Tiles, and Eight Queens (MAA/Cambridge, 2014).

Chapters include "The Church of the Fourth Dimension," "Curves of Constant Width," and "Rep-Tiles: Replicating Figures on the Plane."

Chapters include "Klein Bottle and Other Surfaces," "The Ternary System," and "Mathematical Magic Tricks."

Chapters include "Aleph-Null and Aleph-One," "The Art of M.C. Escher," and "Piet Hein's Superellipse."

8. Mathematical Circus (Knopf, 1979, 15 + 280 pages), covers mostly the 1969–1970 columns. It was subtitled "More Games, Puzzles, Paradoxes, and Other Mathematical Entertainments from Scientific American," and has a foreword by Donald E. Knuth.

Chapters include "Spheres and Hyperspheres," "Can Machines Think?," and "Fibonacci and Lucas Numbers."

Chapters include "Nontransitive Dice and Other Probability Paradoxes," "The Combinatorics of Paper Folding," and "The Game of Life."

This collected all of the Dr. Matrix columns from 1960 to 1980. These were more or less annual tongue-in-cheek explorations of numerological coincidences which Martin delighted in, passed off as reports of encounters with the mythical Dr. I. J. Matrix and his daughter Iva. This volume contains three pieces in the same spirit that did not appear in Scientific American. Less complete collections had been published earlier under different names:

The Numerology of Dr. Matrix (Potter, 1967, 112 pages) contained the first 6 columns alongside one new article as Chapter 4 ("Lincoln and Kennedy"). Its cover added these words under the title, "the fabulous feats and adventures in number theory, sleight of word, and numerological analysis (literary, biblical, political, philosophical, and psychonumeranalytical) of that incredible master mind, first introduced in the pages of Scientific American."

The Incredible Dr. Matrix: The World's Greatest Numerologist (Charles Scribner's Sons, 1976, 256 pages) expanded that by bringing the total to 18 chapters, two of which, Chapters 8 ("Pi") and 11 ("Left versus Right"), were new.

Chapters include "The Binary Gray Code," "Sim, Chomp and Racetrack," and and "Newcomb's Paradox."

Chapters include "Penrose Tiling," "Trapdoor Ciphers," and "Sicherman Dice, the Kruskal Count and Other Curiosities."

Chapters include "Does Time Ever Stop? Can the Past Be Altered?," "Generalized Ticktacktoe," and "Douglas Hofstader's Gödel, Escher, Bach."

Chapters include "The Wonders of a Planiverse," "Non-Euclidean Geometry," and "Minimal Steiner Trees."

Later reissues from other publishers were further expanded, generally with modified cover art, and sometimes new titles too. Information about alternative titles can be found in the brief bibliography by Dana Richards, or the Brian Raiter listing.

Keeping track of which topics or columns appear in which of these spin-off books presents even more challenges. The subject index by Carl W. Lee, or the book/chapter listings of David Langford, may prove helpful, perhaps in conjunction with John Miller's chronological list of all of the articles that Martin wrote for Scientific American.

Note that, unlike in our list above, the Raiter, Lee and Langford sources put Martin Gardner's Sixth Book of Mathematical Games from Scientific American in the seemingly-sensible sixth position. The discrepency arises because we've chosen to consider the third and most complete of the Dr. Matrix books as the definitive one.

In 2006, the MAA issued a searchable CD-Rom Martin Gardner’s Mathematical Games: The Entire Collection of His Scientific American Columns, which is featured on the other "Mathematical Games" spin-offs page.

2006 was also the year that Martin embarked on an ambitious project with the MAA and Cambridge University Press to revise all of these books, for The New Martin Gardner Mathematical Library. He took advantage of web searches—Wikipedia in particular—to learn about recent developments concerning material he'd first written about many decades earlier.

Only the first three shown—revamped versions of his first three Scientific American books with all-new titles—were completed and published before Martin's death; but the list of planned volumes can be seen at the end of this MAA review.