With his second published book Mathematics, Magic and Mystery (Dover, 1956) out a few months, Martin submitted an article to Scientific American about a paperfolding activity with mathamatical underpinnings. "Flexagons, in which strips of paper are used to make hexagonal figures with unusual properties" appeared as a feature in the Dec 1956 issue, and was an immediate hit.

[In due course, this article served as the opening chapter of The Scientific American Book of Mathematical Puzzles and Diversions (Simon and Schuster, 1959). A revised version, as it appeared in that book's later Hexaflexagons and Other Mathematical Diversions incarnation, is available online courtesy of the MAA.]

As Martin recounts in his memoirs, "all over New York City readers of the magazine, especially those in advertising offices, were making and flexing flexagons." Here's a 2-minute clip from the 46-minute David Suzuki CBC documentary The_Nature_of_Things in which Martin speaks about this.

Martin was offered a monthly column in the magazine; this was his big break, and launched the most successful and influential phase of his career.

Less well known is the fact that Martin had written an earlier article on "Logic Machines" for Scientific American (186, 68–73, Mar 1952), which begins, "The ancient idea of a device which would test the validity of a system of thought has recently made progress." In due course, that was expanded into the second book he wrote, Logic Machines and Diagrams (McGraw-Hill, 1958), though it didn't appear until after Mathematics, Magic and Mystery (Dover, 1956), which had been written later.

By the time Martin broke out in style at the end of 1956 with "Flexagons," he was five years into his ten years as contributing editor for Humpty Dumpty's Magazine for children, where he often invented new games that involved the cutting and folding of paper. The kind of flexagons he first wrote about in Scientific American were hexaflexagons, and they had their origins fifteen years earlier at Princeton, due to explorations by a team including Arthur Stone, Bryant Tuckerman, Richard Feynman, and John Tukey.

The first "Mathematical Games" column proper, "A new kind of magic square with remarkable properties," appeared in Jan 1957 (196, 1, –), under the new banner Mathematical Recreation: Mathematical Games. Over time, these colums developed a considerable following; it's been said that at his peak Martin had over a million readers. He had the luxury of being able to devote a great deal of time to researchin g these, often in the New York public library.

Martin wrote one every month into the early 1980s, when he announced retirement plans. From then on they became quite sparodic, with the final one, on Steiner trees on a checkerboard, appearing as "Casting a net on a checkerboard and other puzzles of the forest" (256, 6, 16–23, Jun 1986). (The columns had always appeared under titles assigned by editors.)

The 300-odd "Mathematical Games" columns that Martin wrote were enormously popular and successful. Through them, hundreds of thousands of readers first learned of hexaflexagons, polyominoes, the Soma cube, pentominoes, rep-tiles, tangrams, the art of M. C. Escher, origami, Conway's Game of Life, Penrose tiles, fractals, RSA cryptography, and much more. For more information on the range of topics covered, click here.

Thanks to the MAA, seven classic "Mathematical Games" columns are available online, as they appeared (retitled) in later books.

John Miller's chronological list of every article Martin wrote for Scientific American, originally posted online with Martin's permission, is one of several helpful webpages for keeping track of these columns.

In Aug 1998, Martin wrote one final piece for Scientific American, "A Quarter Century of Recreational Mathematics." In part, it was a survey of the best of the "Mathematical Games" columns, but he found ways to sneak in new challenges and results too. This delightful article, which he wrote at the age of 83, shows that he certainly hadn't lost his touch.

Even from the earliest days, Martin's columns attracted a lot of attention, and associated eye-catching images often graced the coveted cover spot of the magazine. 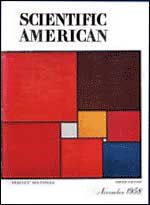 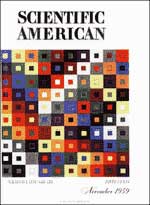 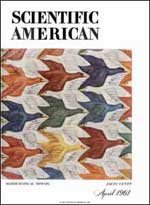 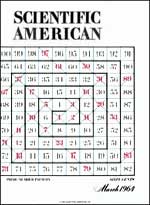 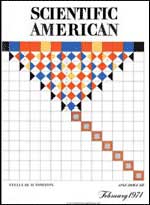 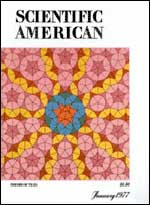