Martin was a great consumer, processor, and refiner of ideas and information, and one of the best manifestations of this is the number of edited volumes he published of works by others, in addition to his annotations and original writing.

The items below are listed chronologically, by publication date.

In the Introduction to this book, Martin writes, "In 1955 Herbert Alexander, then president of Pocket Books, asked me to edit an anthology to be titled Great Essays in Science." This is quite noteworthy in itself, considering that at this stage of his life Martin was "merely" editor of a children's magazine with only one book—the unsuccessful first incarnation of Fads and Fallacies—to his name.

This book featured landmark essays by Darwin, Whitehead, Russell, Wells, Freud, Einstein and Huxley, among others. It was substantially revised decades later as The Sacred Beetle and Other Great Essays in Science (Prometheus, 1984). The later editions added essays by Isaac Asimov, Stephen Jay Gould, Carl Sagan, and Lewis Thomas (and eventually reverted to the original title). 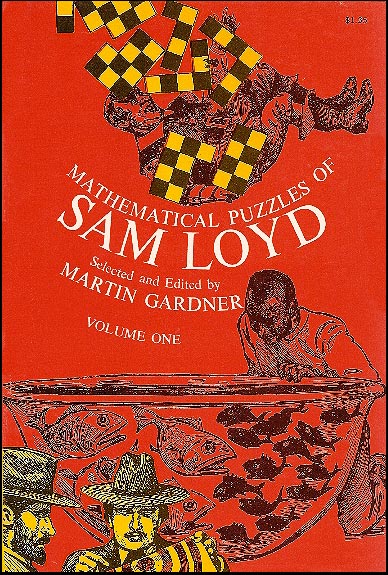 This draws on Loyd's posthumous Cyclopedia (1914), and it was also issued as Mathematical Puzzles of Sam Loyd, Volume One. It contains 117 puzzles, including many that Martin either recycled or emulated in his own puzzle offerings, including the Hidden Star, the 14-15 Puzzle, the Joiner's Problem, the Passing Trains, and numerous dissection problems. Martin published a sequel the following year.

This grew out of lectures by Carnap that Martin had attended many years before, in 1947, at the University of Chicago, when he'd returned there on the G.I. Bill following his four years in the Navy.

This was later reissued as Introduction to the Philosophy of Science (Basic, 1974, and Dover, 1995). All incarnations credit Carnap as the author, and Martin as the editor. On page 201 of his memoirs, Martin writes, "Every idea in the book is Carnap's, every sentence is mine. The collaboration was one of the happiest tasks of my life."

"Edited and with an introduction by Martin Gardner."

This has chapters on Arithmetic and Algebraic Problems (256 puzzles), Geometric Problems (127), and Combinatorial and Topological Problems (87)—each of which is broken up into many parts—as well as separate chapters on Game (8), Domino (15), Match (17) and Unclassified Puzzles (24). Many problems now considered classics can be found here.

"Edited and with an introduction by Martin Gardner."

This was Martin's version of Dudeney's book The World's Best Word Puzzles (The Daily News, 1925). The sixteen chapters range from Enignas or Riddles, Conundrums, Acrostics, and Charades, to Word Chains and Rings, Squares, Stars, Cross-Word Puzzles, and Miscellaneous Puzzles.

"Edited by Martin Gardner"—who also provided an introduction—this was originally published in the USSR as Mathematical Know-how (1956).

Puzzles involving coins, matches, clocks, geometry, dissections, trains and chess abound, not to mention standards Martin loved and reused, such as the nine dots and four straight lines challenge, and the object that costs $1 plus half its price.

Fujimura's 1969 book of 98 puzzles appeared here, "Edited and with an introduction by Martin Gardner." Among the problems here that Martin later used himself are "A Cherry and a Glass," "Tropical Fish," and "Angle on a Cube."

This was Martin's editing for a new generation of a book of which he said, "No better collection of puzzles for young children was ever published."

In his memoirs, on page 130, he writes of his admiration for the work of art editor George Carlson in John Martin's Book. "During the twenties it was the delight of my childhood, mainly because of a Carlson page called Peter Puzzlemaker." He has a whole chapter on Carlson and Martin in his book From the Wandering Jew to William F. Buckley, Jr. (2000), and he edited a second Peter Puzzlemaker book in 1994.

"Edited and annotated by Martin Gardner."

Works from sixty-five poets are included here, from Black, Browning, and Burns, to Tennyson, Whitman, and the Wordsworths (Samuel and William). Each set of poems has an introductory essay by Martin.

This was Martin's reworking of a relatively forgotten "1910 classic" Calculus Made Easy by Sylvanus P. Thompson. Martin used more modern language and notation in an attempt to make the work more accessible to modern readers. Mathematician Ron Graham opined, "Calculus Made Easy is a remarkable and user-friendly approach to the study of calculus."

It's somewhat fitting that this list should end with a book on calculus, given that it's a subject Martin famously never mastered as a younger man, having not taken for credit any mathematic classes after leaving high school in Tulsa, OK, in 1932.